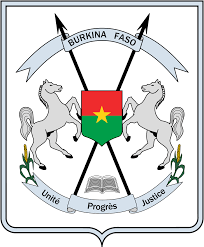 A virtual guide to Burkina Faso, the 'land of the upright/honest people. Burkina Faso (formerly known as Upper Volta; French: Haute Volta) is a landlocked country located in the middle of West Africa's "hump." The northern part lies geographically in the Sahel zone, the transition zone between the Sahara Desert in the north and the tropical savanna in the south. Burkina's landscape offers one major scenario, flat, with some rocky cliffs in the Centre-Nord region and at the Banfora Escarpment around Bobo-Dioulasso, the country's second-largest city.

The country sits on an extensive plateau, it is bordered by Mali in the north and north-west, by Niger in the northeast, by Benin in the south-east and by Cote d'Ivoire, Ghana, and Togo in the south. Burkina covers an area of 274,222 km², this is about three times the size of Austria, or slightly larger than the U.S. state of Colorado.

Burkina Faso has a population of 19 million (in 2016); the capital and largest city are Ouagadougou. Spoken languages are French (official), and several native languages of the Niger-Congo family-like Mossi, Fulani and Dioula, spoken by about 90% of the Burkinabe population.

Background:
Burkina Faso achieved independence from France in 1960. Repeated military coups during the 1970s and 1980s were followed by multiparty elections in the early 1990s. Burkina Faso's high population density and limited natural resources result in poor economic prospects for the majority of its citizens.

In 2014 protests and mass uprising in Burkina led to the overthrow of long-serving ruler Blaise Compaore. Blaise Compaore has managed to run down one of the poorest countries on the planet for 27 years.