Set an image for Namibia 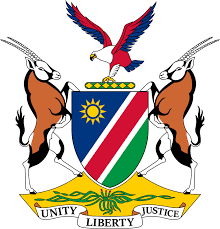 The Republic of Namibia is located in the southwestern part of Africa. Namibia has a population of about 2.1 million inhabitants and an area of 824292 km².

The official name of Namibia is "Republic of Namibia". Namibia is an independent country since 1990, a presidential republic with a democratic constitution following democratic principles including freedom of speech, press and religion. The motto of Namibia is "Unity, Liberty, Justice".

The country has an area of 824 268 km² and a population of only 2.1 million inhabitants. Namibia belongs to the most sparsely populated country in the world.

The capital of Namibia is Windhoek with about 350.000 inhabitants, many of them living in Katutura, a township in the north of the city.

The Republic of Namibia is a vast, sparsely populated country situated along the south Atlantic coast of Africa. It is the first country in the world that has incorporated the protection of the environment into its constitution.

South Africa occupied the German colony of Süd-West Afrika during World War I and administered it as a mandate until after World War II when it annexed the territory.
In 1966 the Marxist South-West Africa People's Organization (SWAPO) guerrilla group launched a war of independence for the area that was soon named Namibia. Still, it was not until 1988 that the apartheid regime of South Africa agreed to end its administration in accordance with a UN peace plan for the entire region. Independence came in 1990.

Climate: mostly hot, varies from hyper-arid and semi-arid to subtropical; the cold desert climate in the southwest.