Set an image for Tunisia 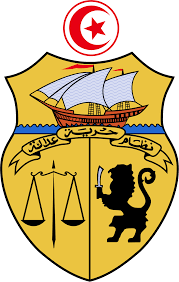 Destination Tunisia, a Nations Online Project country profile of the smallest country in North Africa and the Maghreb region. Tunisia is situated between Algeria and Libya, bordering the Mediterranean Sea. The country shares maritime borders with Italy.

Tunisia covers an area of 163,610 km²; this makes it about two-thirds the size of the United Kingdom or slightly larger than the US state of Georgia.

The landscape of Tunisia is mountainous in the northwest, where the eastern foothills of the Atlas Mountains are located. Within the mountain range is Jebel ech Chambi at 1,544 m, the highest point in the country. Further to the east, along Tunisia's eastern Mediterranean coast, is a broad coastal plain, known as the Tunisian Sahel; the area is famous for its Olive cultivation. To the south lies a hot and dry central plain, the semiarid area merges into the Sahara.

Tunisia has a population of 11.7 million people (in 2020); the capital and largest city is Tunis. Spoken languages are Arabic (official) and French; English and other languages in tourist regions. Official Religion is Islam.

Background:
Following independence from France in 1956, President Habib Bourgiuba established an authoritarian one-party state. He dominated the country for 31 years, repressing Islamic fundamentalism and establishing rights for women unmatched by any other Arab nation.
In November 1987, Bourgiuba was removed from office and replaced by Zine el Abidine BEN ALI in a bloodless coup.

Street protests that began in Tunis in December 2010 over high unemployment, corruption, widespread poverty, and high food prices escalated in January 2011, culminating in rioting that led to hundreds of deaths.

These protests spread in the Arab world to Libya, Egypt, Syria, and Yemen. The wave of violent and non-violent demonstrations, protests, and riots were all meant to remove the corrupt leaders of those countries and to find more democratic political solutions. These movements were coined the Arab Spring.

In Tunisia, parliamentary and presidential elections for a permanent government were held at the end of 2014. Beji Caid Essebsi was elected as the first president under the country's new constitution. The incumbent president is, since 23 October 2019, Kais Saied.

Tunisia is a member state of the League of Arab States

Terrain: Arable land in the north and along the central coast; the south is mostly semiarid or desert.